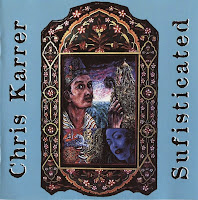 Chris Karrer was one of the most important members of Amon Düül 2.
While his first self-titled solo album he published in 1980,
was more or less prog pop (though somehow enjoyable to listen to),
the following albums in the 90s were quite different and strongly influenced by Karrer's conversion to Sufism.
They sound a lot like Embryo, and indeed Karrer was a member of Embryo for some time in the 90s.
*****************
Christoph Chris Karrer (born 20 January 1947, Kempten, Germany) is a German guitarist and composer. He also plays oud, saxophone and violin. He is known as co-founder of Amon Düül (later participating in the related and much more commercially successful project Amon Düül II) and for his collaboration with Embryo.With his band Amon Düül II he composed film music for Rainer Werner Fassbinder's Niklashauser Fart and Hans-Jürgen Syberberg's film San Domingo (Deutscher Filmpreis 1971 for film music).
http://en.wikipedia.org/wiki/Chris_Karrer

Hello! Sorry if I'm bothering you, but the link is dead. Can you fix it, please?

Can you upload some other record from Karrer? It's difficult to find them, even in stores.

Thank you for your effort to share this music we love and congratulations for your splendid blog.

All I can do is recharge the links,
and that's wath I did for you!

but have no other work by this artist...

Thank you very much for your quick response. I confirm what I've said: it's difficult to get something by Karrer!