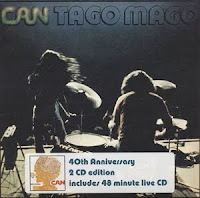 In celebration of the 40th anniversary of the release of Can’s convention-shifting double album Tago Mago, Spoon Records have given the record a new lease of life. Packaged in its original 1971 UK artwork and containing 50 minutes of previously unreleased live material, the re-release is a worthy tribute to what was a genre-defining work of psychedelic, experimental rock music.


With the band in full artistic flower and Suzuki's sometimes moody, sometimes frenetic speak/sing/shrieking in full effect, Can released not merely one of the best Krautrock albums of all time, but one of the best albums ever, period. Tago Mago is that rarity of the early '70s, a double album without a wasted note, ranging from sweetly gentle float to full-on monster grooves. "Paperhouse" starts things brilliantly, beginning with a low-key chime and beat, before amping up into a rumbling roll in the midsection, then calming down again before one last blast. Both "Mushroom" and "Oh Yeah," the latter with Schmidt filling out the quicker pace with nicely spooky keyboards, continue the fine vibe. After that, though, come the huge highlights -- three long examples of Can at its absolute best. "Halleluwah" -- featuring the Liebezeit/Czukay rhythm section pounding out a monster trance/funk beat; Karoli's and Schmidt's always impressive fills and leads; and Suzuki's slow-building ranting above everything -- is 19 minutes of pure genius. The near-rhythmless flow of "Aumgn" is equally mind-blowing, with swaths of sound from all the members floating from speaker to speaker in an ever-evolving wash, leading up to a final jam. "Peking O" continues that same sort of feeling, but with a touch more focus, throwing in everything from Chinese-inspired melodies and jazzy piano breaks to cheap organ rhythm boxes and near babbling from Suzuki along the way. "Bring Me Coffee or Tea" wraps things up as a fine, fun little coda to a landmark record.

I'm a CAN fan, have LP, thanks for Remaster plus bonus tracks

Thanks so much for this Can remaster! ^v^

Thank you Mr Deafears - This is a great post. A wonderful recording. I am playing it now! I appreciate it.

Yes, I have liked CAN since 1974. Have bought Future Days, Landed Soundtracks Monster Movie, Ege Bamyasi, Soon Over Babaluma and Limited Edition all on vinyl and the Future Days and Babalumba both on CD and SCAD

Nice! Me too of course , I already have their 33 rpm, and of course all of the CDs in my discoteek -;)