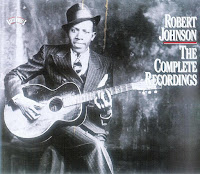 If the blues has a truly mythic figure, one whose story hangs over the music the way a Charlie Parker does over jazz or a Hank Williams does over country, it's Robert Johnson, certainly the most celebrated figure in the history of the blues. Of course, his legend is immensely fortified by the fact that Johnson also left behind a small legacy of recordings that are considered the emotional apex of the music itself. These recordings have not only entered the realm of blues standards ("Love in Vain," "Crossroads," "Sweet Home Chicago," "Stop Breaking Down"), but were adapted by rock & roll artists as diverse as the Rolling Stones, Steve Miller, Led Zeppelin,
and Eric Clapton. While there are historical naysayers who would be more comfortable downplaying his skills and achievements (most of whom have never made a convincing case as where the source of his apocalyptic visions emanates from), Robert Johnson remains a potent force to be reckoned with. As a singer, a composer, and as a guitarist of considerable skills, he produced some of the genre's best music and the ultimate blues legend to deal with. Doomed, haunted, driven by demons, a tormented genius dead at an early age, all of these add up to making him a character of mythology who -- if he hadn't actually existed -- would have to be created by some biographer's overactive romantic imagination.

The legend of his life -- which by now, even folks who don't know anything about the blues can cite to you chapter and verse -- goes something like this: Robert Johnson was a young black man living on a plantation in rural Mississippi. Branded with a burning desire to become great blues musician, he was instructed to take his guitar to a crossroad near Dockery's plantation at midnight. There he was met by a large black man (the Devil) who took the guitar from Johnson, tuned it, and handed it back to him. Within less than a year's time, in exchange for his everlasting soul, Robert Johnson became the king of the Delta blues singers, able to play, sing, and create the greatest blues anyone had ever heard. .../....

A double-disc box set containing everything Robert Johnson ever recorded, The Complete Recordings is essential listening, but it is also slightly problematic. The problems aren't in the music itself, of course, which is stunning and the fidelity of the recordings is the best it ever has been or ever will be. Instead, it's in the track sequencing. As the title implies, The Complete Recordings contains all of Johnson's recorded material, including a generous selection of alternate takes. All of the alternates are sequenced directly after the master, which can make listening to the album a little intimidating and tedious for novices. Certainly, the alternates can be programmed out with a CD player or mp3 player, but the set would have been more palatable if the alternate takes were presented on a separate disc. Nevertheless, this is a minor complaint -- Johnson's music retains its power no matter what context it is presented in. He, without question, deserves this kind of deluxe box set treatment.

This two-CD box contains all 41 recordings Johnson made, including 12 alternate takes, and each cut remains a classic. This set's release in 1990 caused quite a stir, selling more than 500,000 copies and, on the basis of endorsements from Eric Clapton and Keith Richards, introduced a great number of rock fans to Delta blues.

Muddy Waters is probably the most famous of all bluesmen, but not many people know that, in the early years of his carear, he was a Robert Johnson tribute act.

Standing on the shoulders of the great delta blues giants like Son House and Lonnie Johnson, Robert Johnson took accoustic blues to reach it's pre-war peak, before amplifiers and the electric guitar came in.

As a singer he is passionate rather than technically brilliant, but it is as an accoustic blues guiitarist that he is unsurpassed - not just my view but Eric Clapton's as well. No-one else could play such a variety of styles with such power, feeling and emotion. In fact so skillful was his playing that when Keith Richard of the Rolling Stones first heard it, he was conviced that there were two people on the record - one doing the lead work and one doing the bass runs, rather than Johnson managing both simultaneously.

The best thing about this CD is that it has every single take that he ever recorded - from the intense, crazed "Preaching Blues (Up jumped the Devil)" to the slow, moving "Come on in my Kitchen" which, according to Johnny Shines, reduced men to tears when Johnson played it live.

If you only have one accoustic blues CD in your collection - this is the one it should be. 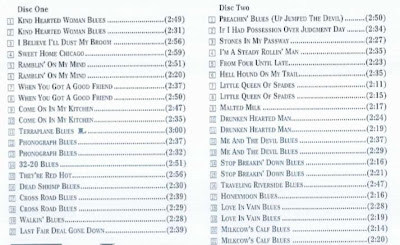 Thank You Very Much...