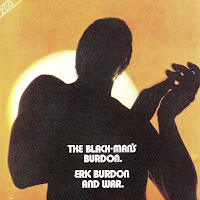 Here we're offered a clean and more polished Burdon backed up by some of the greatest musicians of the day. The Black-Man's Burdon didn't produce any hits, but it did showcase the raw power of War itself. Although Burdon's rhetoric is held somewhat in check here, it still manages to get in the way of the band at times on this 1970 MGM release. Eric Burdon & War's second offering (a double LP) would also be their last together. Burdon would never sound this poignant in his career again, and Spill The Wine (from Burdon declares "War") would be remembered as the only relevant material Burdon performed in the post-Animals era.


A point worth mentioning is that it's War's noodling (The Bird And The Squirrel and Nuts, Seeds & Life) in the wake of the classic Beautiful New Born Child that hold your attention. Setting you up for the relentless Out Of Nowhere (that should've been released as a single). In the twilight of the hippie era Jerry Goldstein produced some of the most social and introspective material of the year. Gun hints at a country sick and tired of the Vietnam conflict, while Sun/Moon soothes the listener for the pop sounding Pretty Colors. War's innovative fusion sound would carry them through the entire decade of the 70's, producing a string of 8 gold records in a row.
*****************************************
Eric Victor Burdon is best known as a founding member and vocalist of The Animals, a rock band formed in Newcastle, England, and the funk rock band War, and his aggressive stage performance. He was ranked 57th in Rolling Stone's list - The 100 Greatest Singers of All Time.
Thi is the second and final album with War,
Black-Man's Burdon was a double set that could have benefited from quite a bit of judicious editing. Composed mostly of sprawling psychedelic funk jams, it does find War mapping out much of the jazz/Latin/soul grooves that, cut down to much more economical song structures, would shortly bring them success on their own.
The album includes two suites based on cover versions of songs by other artists: "Paint It Black" by Rolling Stones, and "Nights inWhite Satin" by Moody Blues, augmented by additional sections composed by the group.

Could you please re-upload this hard
to find album.