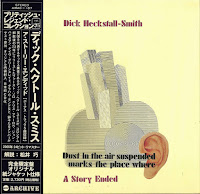 Richard Malden Heckstall-Smith (26 September 1934 – 17 December 2004) was an English jazz and blues saxophonist.
He played with some of the most influential English blues rock and jazz fusion bands of the 1960s and 1970s.

Recorded in April 1972, "A Story Ended" was the debut solo album by Colosseum saxophonist Dick Heckstall-Smith.
Recorded upon the demise of Colosseum, the sessions featured contributions by Jon Hiseman, Mark Clarke,
Chris Farlowe & Dave Greenslade of the band, along with Graham Bond

(of whose Organization Dick was a member alongside Jack Bruce & Ginger Baker),
Chris Spedding and lyrical offerings from Pete Brown. A superb example of Jazz influenced Progressive rock,
the album appeared on Bronze Records in 1972 and is now hailed as a classic of the genre.

All compositions by Dick Heckstall Smith, Lyrics by Pete Brown except where noted
Bonus Tracks 7-11
Tracks 10-11 recorded as Manchild