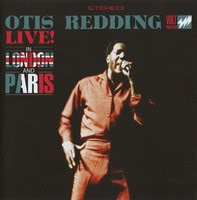 When the Love Generation (which, truthfully, did no better with that emotion than any other generation) got its first real glimpse of soul giant Otis Redding at the Monterey Pop Festival in 1967 backed by Booker T. & the MG's, a powerhouse band if there ever were one, they saw love with a capital L, because Redding sang love songs like the world was about to end, wringing the emotion out of them like a soulful, urgent hurricane. He was, simply put, an unstoppable force on-stage, taking all the energy of gospel and upping the ante until it seemed like the very sky itself was about to fly off into space from the very power of it. Redding was soul, and soul in every fiber of his being. The two sets included here, which predate the
Monterey performance by a couple of months, were recorded in London (March 17) and Paris (March 21) on the Stax/Volt package tour of Europe in 1967, and they just might be even more astounding (particularly the Paris night) than the Monterey set. Working again with the MG's, with the horns of the Mar-Keys along for extra kick, Redding burns the house down in both of these sets, wringing every last bit of energy out of Sam Cooke's "Shake" until it seems the universe is about to come off its hinges, turning "Try a Little Tenderness" into a silken caress, making "I've Been Loving You Too Long" into an anthem for the hopeless arc of love, and taking "Day Tripper" to places the Beatles could only dream about, all with the MG's and the Mar-Keys churning behind him like a huge, funky turbine. This was Stax soul in all its ragged, vital glory. The original tapes of these sets (Atlantic issued an LP of the London show in 1967) have been reassembled and restored for this release, and the end result is a stunning reminder of what a giant Redding was. You want to know about love? Drop this in your player.

It's really exhausting always the same question: 'what is the password?' Remember the first time you clicked to go to the freetext page, what did you see? -> THE ANSWER TO YOUR QUESTION!

I don't know what the free text page is. But no worries, I'll just get this someplace else... sorry to have bothered you. Peace.

If you see this line here above the comments, clic on it and you will see the free-text-page:
>Otis Redding - Live in London and Paris (1967)<
and no sorry about you're welcome!

Unfortunately the links are down. So, if you find the time, I'd be grateful.

And I won't ask for the password. Promise!
Thanks in advance

The usual password is not working on this one. I downloaded both parts two times, but no luck. Checksum error both times. But thank you for all other albums!

You are right;The usual password is not working on this one!

note; I've downloaded the archives and everything is going pretty well, so no problems with the "correct" password! -;)