Fans of West Coast psych should not hesitate to grab this 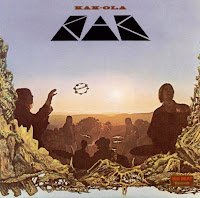 Although formed in Davis, California, Kak were based in San Francisco for a good part of 1968, when they recorded their only album. Lead singer, guitarist, and primary songwriter Gary Lee Yoder and lead guitarist Dehner Patten had been in the Oxford Circle, an obscure early Northern Californian psychedelic band that had cut one garage/psych single ("Foolish Woman"/"Mind Destruction") and played some shows on the San Francisco psychedelic circuit, while bassist Joe-Dave Damrell had been on a 1965 single on Scorpio Records with Group "B".
The self-titled Kak LP was minor-league San Francisco psychedelic rock colored by a lot of influence from bigger Bay Area bands,
particularly Moby Grape; the vocal harmonies and curling guitar work on tracks like 'Disbelievin'" and "Everything's Changing" in particular sounded like a more pedestrian Moby Grape. There were also more distant echoes of Quicksilver Messenger Service (in the guitar work) and the Grateful Dead (in faint traces of country-blues-rock). Kak were best, and least derivative, at their quietest, as on the gentle country-tinged rocker "I've Got Time, " the good-time wistful psych-folk-rock of "Lemonade Kid, " and the harpsichord-decorated ballad "Flowing By, " which was as derivative of Donovan as much of their other songs were of Moby Grape.
Kak's album was barely promoted and sold little. It didn't help that the band played less than a dozen shows before breaking up in early 1969, Damrell having already quit prior to the split. Yoder did a single for Epic and and then joined Blue Cheer. The Kak album eventually became a pricey collector item, and was reissued on CD by Big Beat (with the new title Kak-ola) in 1999 with plenty of bonus cuts, including previously unreleased acoustic demos and Yoder solo tracks from the late sixties. - Richie Unterberger
None of the plodding riffs, histrionic vocal stylings, or blues posturing that plagued many similar groups of this era mar this collection of melodic, tasteful progressive hard rock (as well as some mellower country-rock songs). Leader and main songwriter Gary Yoder would eventually join Blue Cheer and add his distinctive stamp to that band's sound. The 1999 Big Beat CD, titled Kak-Ola, includes everything from the Kak LP, but also adds eleven bonus tracks. These include the 45 version of "Rain"; five previously unreleased acoustic cuts, four of them versions of songs from the LP, one ("Bye Bye/Easy Jack") of a tune that was not included on Kak; the "Flight From the East"/"Good Time Music" Gary Yoder solo single on Epic, released after Kak had split; and three Yoder solo demos from late 1967. - Jim Powers
*********************************************
15 Tracks from 60's Psych Legends Kak plus Five Bonus Solo Recordings by the Band's Leader Gary Yoder (Later of Blue Cheer).

Top!
Thank you very much.

Thanks you for this album. Unfortunately the link is dead. Could you reupload the album, please?

Thank you very much!

Hello There! I love this album, thank you for posting!I'm having issues with the password, what is the correct one please? Thank you!!!

On the mainpage you clicked on ==> ** KAK ** <==
a link that you brought to the download page
and it is there that the password is also located -;)

Thank you Progger Ears, I see that . Pasted Page. But when I download, the password that's given doesn't work during extraction! Is it possibly different than what's on the PASTED page? Any help would be really appreciated! Thanks!

I actually noticed that almost all the links that have that password (V*l) do not work! Any ideas what is going on? Thank you very much!

I myself have tested this password on my computer, and for me that works easily, no problem.
Try to copy/paste the password ,i hope you will vind a solution on your problem -;)

I used a different archiving app and it worked!!! Thank you, keep up the amazing work!

Yeah friend, that's what happend: you used an old version of rar app!

part of the info that I writted on the main page, upper on the left ;

"...If you downloaded the RAR file, double clicked and put in password, but you keep getting message that archive file is incomplete or corrupt: USE the new version ; Install WinRAR v5.01. And it will work"...

I'm glad you found the solution, I wish you much pleasure with the music! -;)