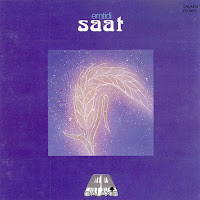 Emtidi were a duo made up of Maik Hirschfeldt from Germany and Canadian Dolly Holmes, who initially presented a rough-around-the-edges acoustic folk album for their debut all the way back in 1970. Two years later, and the pair not only gave their folky tunes an acid-twisted working over, but they introduced Mellotron and other trippy electronic enhancements to take their music a gentle step closer to some of the sounds that the harder rocking underground German bands were experimenting with, even offering two ambitious extended psychedelic suites, and `Saat' now holds a quietly spoken of place among so many other notable `Krautrock' works from the early Seventies.

There's a quirky and slightly bent edge to opener `Walkin' in the Park', an alternatively melancholic and spirited hippie folk ditty with dreamily chiming electric guitar strains and frantic runaway soloing in the manner of Manuel Göttsching and the Ash Ra Tempel. In fleeting moments Maik and Dolly sing in unison over lethargic acoustic guitar strums, the pair sweetly murmuring an amusing and playful repeated refrain of `Don't sit on the grass, it's too cold for yer ass...'! The crystalline `Träume' is a pretty and spacey keyboard interlude with Dolly cooing over the top, and the twelve-minute `Touch the Sun' is a wild blur of eerie keyboard drones, approaching/retreating shimmering synth ripples, regal scratchy Mellotron veils, ethereal siren cries and dazzling symphonic reaches. It ends up reminding of everything from Dom's `Edge of Time', the male/female proclamations of Brainticket and Amon Düül II, as well as the fuzzy atmospheres of early Tangerine Dream and even Deuter's schizophrenic `D'.

The B-side's `Love Time Rain' is a vibrant and catchy folk tune sung by Dolly over strident country-flecked guitar strumming, and the title track `Saat' is a stark folk meditation with a plaintive vocal, the acoustic backing again reminding of those gentler reflective passages off the early Deuter albums. The ten minute `Die Reise' closes on a delicious mess of noises and splintering musical fragments that take on a maddening intensity! A blur of ebbing electronics, huffing flute, jazzy electric piano slices and ragged acoustic guitars constantly growing more purposeful and intimidating, Maik barks out a harsher German vocal amidst spectral organ bleeding delirium, and the piece is almost as mischievously deranged as it is delightfully devilish!

While `Saat' holds some similarities to Hoelderlin's much-praised debut `Hölderlins Traum', some listeners may find a few of the vocals a little shrill, and the unpredictable direction changes crudely implemented and poorly developed. But it's that exotic blend of pastoral acoustic naivety and electronic experimentation that makes it so fascinating, and there's little traces of that scuzzy danger that permeates all the classic Krautrock discs. Ideal for those who wants a further reaching folk album or a softer Krautrock experience, `Saat' is simply another precious psychedelic gem from the vintage era well worth rediscovering today.
(Review by Aussie-Byrd-Brother)

With:
- Dieter Dierks / percussions, bass and help with Mellotron