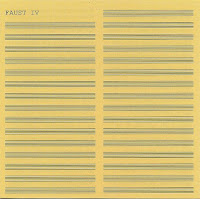 In 1973, Faust had gained a reputation as a 'difficult' band, thanks to both their pure-drone collaboration with Tony Conrad, Outside the Dream Syndicate, and the infamous Faust Tapes, a cut-and-paste collage of studio shards sold in the UK for 48 pence —the same price as a single— as a promotional introduction to English audiences. Yet, Faust's masterwork, Faust IV, is anything but hard to love; beginning with the epic, immense, swelling, 12-minute "Krautrock," in which corrosive guitar, blips of synthesizer, spirals of organ, and skittering percussion slowly build up to celestial heights. The song didn't give the genre its name, as many mistakenly think; rather, Faust were laughing at what the British press were calling their music.
---------------------------------

Faust IV is a weird and wonderful album by one of Germany's weirdest, most experimental rock bands. This music truly is not for the faint of heart, and should only be approached by those who can fully appreciate weird, avant-garde music- though IV is easily the most accessible of Faust's records, as many of the songs are short and, from a format standpoint, "normal"- or, at least, as close as Faust can get to normal.

The album begins with a droning instrumental, appropriately titled "Krautrock". This is simply brain-frying, aggressive krautrock at its best. Then comes the Sad Skinhead, a short, pleasant reggae-ish piece that could be considered pretty normal by some- except for the fact that Faust isn't a reggae band. TSS proves that Faust is willing to go outside all boundaries, a trait present in many successful experimental bands. After that is the best song on the album- Jennifer, anchored by pulsing bass that seems to reverberate around one's very soul; it plays out like a relatively typical love song, fed through the weird machine that is Faust- resulting in repetitive, probably meaningless lyrics, which is not a bad thing; they really give the song a mesmerizing, cerebral feel. It eventually falls apart into a guitar crunch and some random playful messing-around. Just A Second starts as a nice krautrock piece, but after a little over a minute, some annoying watery, possibly flatulent sound effects come in. They eventually morph into some nice textural noises, as the song continues along its old path. Then is Picnic on a Frozen River, an interesting song, not quite different from the previous one, so still great- the difference is that there's lyrics, which give it a drunken party feel- it truly does feel like a jaunty, rowdy picnic! After that is the best "short" song, Giggy Smile, featuring some great guitar and indecipherable vocals- the song is quite joyful, and it seems to course through me and put me in a good mood, like an anti-No Surprises. "Läuft...Heist das Es Läuft Oder Es Kommt Bald...Läuft" is a nice ambient song, beginning with murky guitar and then synths reminiscent of Kraftwerk's Autobahn. And finally, It's a Bit of a Pain is a relaxing, country-ish song that closes the album nicely, and, in true Faust style, it ends with a Swedish woman talking about body hair. Overall, an enjoyable release by a great German band, and required listening for potential krautrock fans. Deserves and gets four stars.
Neurotarkus | 4/5 | 2009-12-30 From Progarchives.com, the ultimate progressive rock music website