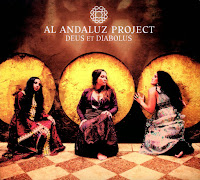 The bewitching Deus et Diabolus (God and the Devil) threads together the voices of three women: Mara Aranda, from Valencia's L'Ham de Foc; Sigrid Hausen, from Munich's medieval music group Estampie; and Iman al Kandoussi. They are accompanied by a lively ensemble of flutes, qanun, ud, saz, rabab, fiddle, nyckelharpa, hurdy-gurdy, pandera tambourines and percussion. It's an inspiring encounter between the talented musicians of L'Ham de Foc and Estampie recorded in the old Cartuja Monastery, Cazalla de la Sierra, Seville. This is sprightly music, fusing Mediterranean, Oriental and medieval moods. The ethos underpinning their reinterpretations of Arab, Jewish and Christian cantigas to the Virgin Mary, their reimaginings of sensual dances and Arabic songs, is expressed by a line from poet Ibn al-Arabi, `Wherever the caravan may bend its steps/Love is my religion'.

While each exquisite piece speaks for itself, they flow together like a song cycle embedded in a utopian view of the past as one of dialogue and peaceful co-existence between religious cultures. The 13th-century `Cantiga de Santa María' is just one breathtaking moment, transporting in the way the timbres and textures of voices and instruments interweave. The arrangements for each of the 12 songs are stunningly varied, each `voice' jewel like, distinctly within the fabric of pieces.
Frustratingly, the attractive booklet (in German, Spanish and English) offering general background and interspersing songs texts in Arabic and old Spanish, with seductive photos of the three women and Seville's Arabic Baths, fails to include the vivid `story' detail that would help reference the individual songs that capture attention. Still, it's a brilliant disc nonetheless. ~ Jan Fairley
------------------------------------
History of the Al Andaluz Project

The realization of that special idea is the history of the encounter of two music formations. Michael Popp, musical director of the group Estampie, well-known in the medieval music-scene for their innovation and quality, has never ceased to criticize publicly insubstantial academical parading of supposedly authentic performance or medieval ballyhoo and commerce. After one Estampie concert a visitor presented Michael with a recording and said: "This will probably find favour in your critical ears...". It was a record of the band L´Ham de Foc from Valencia (Spain) who have put a name on the map of world music with their typical mixture of mediterranean, oriental and medieval music. With a smaller by-project focussing on sephardic music, Amán Amán, the band was to guest just a few weeks later in Munich, Estampie´s homebase. Enthusiastic about the record, Michael Popp took the chance and proposed a mutual project to the Spanish musicians. It didn´t take long to find out that they were birds of a feather, like-minded in musical as well as in human views, and the project made quick progress during several visits to Valencia and Munich.

During these highly productive and inspiring encounters, musical experience was exchanged and absolutely new ideas came up. The result of this co-operation, the „Al-Andaluz-Project“, was first released at 15. July 2006 on the occasion of the Landshuter Hofmusiktage. The live recording was broadcast by the Bayerischer Rundfunk. The by now available album was recorded in November 2006 at the medieval Dominican Monastery La Cartuja near Seville.

The encounter of the three „leading“ cultures of the Middle-Ages – muslim, jewish and christian – a topic as fascinating and controversal as ever - is reflected in the Al-Andaluz-Project by the origin of the involved musicians. Just recently violent-prone fundamentalist movements, whether religious or not, have taken centre stage of public debate. Unfortunately, the necessary basic knowledge of the matter is often fragmentary, this being due to a general ignorance of the historical context. And this in view of the incredible abundance of musical literature. In some regions this music has never ceased to be living tradition until today. Especially in the realm of music, the peaceful co-existence of the three great cultures lasted for centuries – a shining example for a mutually enriching and inspiring social life.

Al Andaluz (or Al-Ándalus) is the name chosen by the Ummayad conquerors for the Iberian Peninsula. Moorish-governed Spain was not only famous for its tolerance and scholarship, but for prosperity, trade and flourishing arts as well. For many centuries, people with different religions - muslim, jewish and christian - lived together in peace and inspired each other. Philosophers, poets, artists and musicians were most welcome at the courts of occidental rulers like Alfonso X. "the Wise" of Castile, and made their artistic contribution to a unique merging of cultures.

Regardless of their religious denomination people were striving for philosophical, scientific and religious truths. Instead of being a problem, diversity and variety were highly appreciated. The Caliphate Córdoba featured nine hundred public baths (hamams), thousands of mosques, running water and well-lit streets. By the 11th century, Toledo had become the intellectual capital of Europe, a christian city where Arabic continued to be the language of culture and scholarship. It was via Toledo, with its schools of translation and its famous libraries, that the rest of Europe could gain access to the ancient writings. Closer studies of that age leave the impression, that the Middle Ages in Al Andaluz were anything but dark in many ways. Quite the contrary: never again has been achieved an equally unique religious and cultural merging.

The Al Andaluz Project, in special line-up, wants to revive these special aspects of Al Andaluz for our today`s world. In dialogue with the old songs, with different linguistic and musical cultures, a new musical entity can come to life, a vision of tolerance, as the andalusian poet Ibn al-Arabi wrote in a poem:

My heart has been adopting manyfold appearances
It is the monastery for Christian monks
or the temple for idols
or the Ka´aba for the circle of pilgrims
or the tablets for the Tora
or the pages for the Koran
But wherever the caravan may bend its steps
Love is my religion.

Or
For lossy go to link below:

This is so exciting music. Could you please re-up this ? Link is no longer available. Many thanks and best regards.