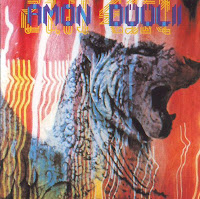 So often is the case with the music of AMON DUUL II either you get it or not... usually nothing in between. I do really enjoy the early years of AMON DUUL II with "Wolf City" representing one of them. The thing that sets this album up differently from say an album like "Yeti" is clearly the more accessible progressive leanings, yet still remains highly imaginative. This album mixes psychedelic and progressive rock in a way no one else could. On top of the usual guitar, bass, keyboards, AMON DUUL employ a nice dose of sitar (Pandit Shankar), tabla kettle drum and tambura which really all clicks on this album. Without a question Renate Knaup's vocals do take some slight adjustment to get into but for this music lover fits perfectly. This is a lively, fun and exciting album to listen to and I love their use of the distorted wah wah guitar and phasing effects and of course vintage keyboards. Musically this is actually fairly aggressive sounding without being noticeably loud or over the top. Songs are highly creative and cover quite a wide range of influences from the early sounds of PINK FLOYD to the punk mood of the late 70's to the psychedelic aura of The OZRIC TENTACLES. Overall a magical album and one that needs to be your collection.

Getting Wolf City now. Thanks a lot! Beenlonging to hear Deutsch Nepal again for ages but forgot title and band name. Good times are back :0)

I love the blog! The link to this album is dead. Can you please re-up? Thanks!

Hello music-loving friend. You always upload great stuff. Can you do something with this link? It doesn't work. Thank you in advance!

Here it is ones again,

I didn't expect you to do it so fast!!! I just downloaded it and thought that I should thank you before start listening. THANKS A LOT!!!