Otis and Carla grind out some soul classics

They didn't mess around in them days. Recorded over just six days in January 1967, this was Otis Redding's sixth album and his fifth since joining Stax Volt stable in only 1965. Witnessing the success of Motown's pairing of Marvin Gaye with Tammi Terrell and Kim Weston (amongst others) the label decided to combine two of its biggest stars and this was the result. 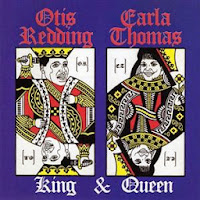 Carla Thomas had already broken into the mainstream the previous year with B-A-B-Y, but Redding, although a relative stranger to the pop chart was by this time huge on the black charts and had done pretty well making inroads to mainstream success with I've Been Loving You Too Long (To Stop Now), Mr Pitiful and Fa-Fa-Fa-Fa-Fa (Sad Song).

Ostensibly, King & Queen not only allowed Otis and Carla to get their chops into some absolute classics (Knock On Wood, Bring It On Home To Me) but it also let them recreate a Gaye and Weston moment on It takes Two.

Backed by the house band of Booker T Jones and his ubiquitous MGs as well as the talents of Isaac Hayes and Jim and David Porter at the controls, the Stax family may not have broken the rule book with this one, but they still made a solid gold effort. What's more, the track Tramp broke the pair's mainstream duck; its friendly badinage propelling them into the US charts. Following this Lovey Dovey and Knock On Wood also became hits.

Could you please re-upload this record.