Pickett was born March 18, 1941 in Prattville, Alabama and grew up singing in Baptist church choirs.

He was the fourth of 11 children and called his mother "the baddest woman in my book," telling historian Gerri Hirshey: "I get scared of her now. She used to hit me with anything, skillets, stove wood — (one time I ran away and) cried for a week. Stayed in the woods, me and my little dog." Pickett eventually left to live with his father in Detroit in 1955. 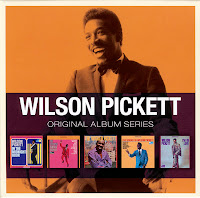 Pickett's breakthrough came at Stax Records' recording studio in Memphis, Tennessee, where he recorded his third Atlantic single,
"In the Midnight Hour" (1965), his best-remembered hit, peaking at #1 R&B, #21 pop (US), and #12 (UK).It sold over one million copies, and was awarded a gold disc.

The genesis of "In the Midnight Hour" was a recording session on May 12, 1965, at which Wexler worked out a powerful rhythm track with studio musicians Steve Cropper and Al Jackson of the Stax Records house band, which also included bassist Donald "Duck" Dunn. Stax keyboard player Booker T. Jones, who usually played with Dunn, Cropper and Jackson as Booker T. & the M.G.'s, did not play on any of the Pickett studio sessions. Wexler said to Cropper and Jackson, "Why don't you pick up on this thing here?" He performed a dance step. Cropper later explained in an interview that Wexler told them that "this was the way the kids were dancing; they were putting the accent on two. Basically, we'd been one-beat-accenters with an afterbeat; it was like 'boom dah,' but here this was a thing that went 'um-chaw,' just the reverse as far as the accent goes."[citation needed]
[edit] Stax/Fame years (1965-67)

For his next sessions, Pickett would not return to Stax; the label's owner, Jim Stewart, banned all outside productions in December, 1965. As a result, Wexler took Pickett to Fame Studios, another recording studio with a closer association to Atlantic Records. Located in a converted tobacco warehouse in nearby Muscle Shoals, Alabama, Pickett recorded some of his biggest hits there. This included the highest charting version of "Land of 1,000 Dances", which became Pickett's third R&B #1, and his biggest ever pop hit, peaking at #6. it was another million selling disc.


...or you can buy it here===>  Original-Album-Wilson-Pickett

Thanks a bunch for the Wilson Pickett flac albums :)

Hi,
Can you re-up part 1 the link is complety dead.Thanks U for your good choice

THANK YOU!!! Thank you for re-upping! (even though I wasn't the one who asked!)