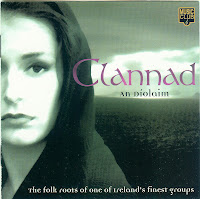 This collection takes the internationally known group back to their roots, drawing together the best of Clannad's early recordings. Though not as commercial or pop-oriented as their later work--the instrumentation is all acoustic and there's a definite Irish lilt to even the English lyrics--the smooth, deft touch that is a hallmark of Clannad's style is definitely there. An Díolaim showcases their folk roots, but such songs as "Siuil a Run," "Cumha Eoghain Rua Ui Neill," and "By Chance It Was" hint at the direction they would later take--The Chieftains this ain't. It is, however, a fine collection in its own right, showing very clearly the evolution of present-day Celtic-oriented music. --Genevieve Williams


For those who are fans of this great Irish group this is a combination of tracks from their second and third releases titled "Clannad 2" & "Dulaman". Great traditional Irish ballads as well as original songs by this Group. If you do not own either of these CD's and are fans of this group, a must for your collection. For those of us who have collected their works, unless you want duplicate pressings, unfortunately skip this one.

The wide music featured in this reprised album of Clannad's first several albums originally released on an obscure Irish label is a rare glimpse into the group`s stunning early work and their matchless contemporary orchestral arrangements of traditional Gaelic folk songs. This album is Gaelic folk oriented, and is a wonderfully acoustic treat featuring with all the amazing virtuosity this very musically-talented extended family of sisters, brothers and uncles from a small village in rural Ireland is noted for. Although I enjoy their newer work, I am always drawn back to this particular collection of their original seminal work as an exciting young folk group with a special musical magic of their own. From the stirring opening chorus of "Dulaman" (Seaweed) to the haunting instrumental "Eleanor Plunkett" to the cautionary traditional song about the rivalry of two siblings to the winsome harp sounds of "Fairly Shot Of Her" this album showcases the group at the apex of their folk powers, and they never make a false step here.

The early group included Enya, Maire Brennan's younger sister, who later went solo to become a stellar "new age' performer. My own personal favorites are "Suiul Ran (Irish Love Song), sung both in English and Gaelic, "By Chance It Was", and the haunting "Lament For Owen Roe" a wonderful harp instrumental work. This is rally a double album crammed full of wonderful authentic Gaelic interpretations of traditional Irish music by a group that was singularly stunning in their ability to recreate it in a particularly spellbinding way for a contemporary audience. Whenever I hear the album I remember the gorgeous Celtic countryside and the time I spent in Galway along the Irish coastline. This is authentic Gaelic folk music at its best! Enjoy!