Orange Blossom – Everything Must Change (2004) 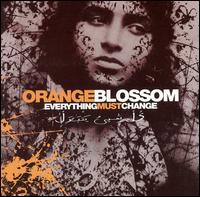 Orange Blossom are a French worldbeat group who released their debut album in 1997 and were sporadically active thereafter
Founded in 1993 in Nantes, Pays de la Loire, the group was originally comprised of P.J. Chabot (born Pierre-Jean Chabot;
violin) and Jay C (born Jean-Christophe Waechter; vocals). Amid other lineup changes, Carlos Robles Arenas
(drums, percussion, sampler) joined the group in 1995. Orange Blossom made their eponymous full-length debut in 1997
on the independent label Prikosnovénie and toured internationally in support of the album. However,
founding group member Jay C left in 2000 to found a new group, Prajna, and Orange Blossom were left without a
vocalist and consequently put on hold for a couple years. Leïla Bounous (vocals) and Mathias Vaguenez (percussion)
eventually were recruited to join the group in 2002, and work on a new album began thereafter.
Released on the Bonsaï Music label in 2005, second album Everything Must Change proved significantly more popular than
its predecessor, reaching number 141 on the French albums chart. In the wake of its popularity,
Everything Must Change was licensed for international release by the British label Wrasse in 2006,
and the group’s eponymous debut album was reissued that year as well.

Indeed you are right, I think so too