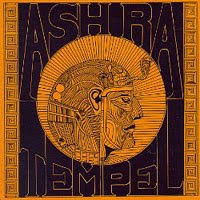 One of the most formidable of the German Krautrock groups, ASH RA TEMPEL were a powerful force led by guitarist Manuel GÖTTSCHING, and also included former TANGERINE DREAM drummer Klaus SCHULZE at various points. Their music is very spacy and psychedelic, in the manner popularized by early HAWKWIND and AMON DÜÜL II. The early albums all had basically one track a side, one more powerful and dramatic, the other of a more atmospheric nature.

Their albums are all classics; those with Klaus SCHULZE ("Ash Ra Tempel" and "Join Inn") are the best. ASH RA TEMPEL's first release is a classic of the space/cosmic genre. This is definitively the one to start with if you're not familiar with this band. "Schwingungen" is a vastly underrated album even by ardent fans of the band. Basically, "Join Inn", along with the two albums, are supposed to be the essential works from ASH RA TEMPEL, and I certainly haven't been disappointed by any of the three. GÖTTSCHING's later work varied between solo albums and those within a group format.

Later, after recording the dreamy soundtrack "Le Berceau de Cristal" (1975 unreleased until the 90's) ASH RA TEMPEL changed name to ASHRA, making a more melodic synthesizer based music. In the year 2000 the ASH RA TEMPEL moniker was reborn. Joined by long-time colleague Klaus SCHULZE, the appropriately titled "Friendship" was released. This is the best release by Manuel since "Blackouts" and shows that he hasn't lost his touch. ASH RA TEMPEL is probably the best known band of the German space scene. A SPACE JOURNEY FROM START TO FINISH...!

If you love the old "Space Tripp in" thing then ASH RA TEMPEL is just the thing the Doctor ordered. ASH RA TEMPEL's 1st album is a classic in the genre of Space Rock led by guitarist Manuel Gottsching and a very young Klaus Schulze (percussion and electronics). Their 1st album really has a split personality and offers 2 very different landscapes for the listener from the chaos of the first 20 Mins epic "Amboss" (Anvil) to the tranquil "Traummaschine" (Dream Machine) which both seem to be born from the same cosmic voyage. Amboss is a heavy cosmic acid space journey which seems to draw the listener effortlessly into the wake of the TEMPEL. Along the way you are surrounded by Gottsching?s crazy guitar playing and Schulze?s frantic drumming and electronic smogasbourg. Track 2 (25 mins) is much less frantic and seems to by opposition draw the listener back inside the TEMPLE but this time into a very different region. "Traummaschine" relies much heavier here on the electronic meditation and instead builds into a very deep and slow space climax which seems very soothing and will send you off into another dimension. Overall this is a superior reproduction and sound is very well preserved considering the age offering nice speaker separation throughout. This is a great recording to sit back and put on the old headphones. Highly Recommended .

Thank you so much. I was hoping to be able to experience this massive sonic trip in a lossless format. I have deleted it after 24 hours and will buy the record. Thank you