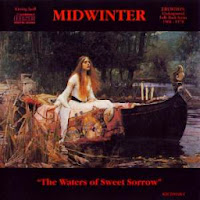 This album is a chance oddity offered by Paul Corrick and Ken Saul who would later form the only slightly more modern Stone Angel. The other dynamic here is the almost angelic and medieval-sounding Jill Child. As the story goes Corrick and Saul recruited Child to lend a voice for a local show, which later turned into a couple years of sporadic live appearances before Child left to pursue an education.

Too bad, because this is a charming bit of old Anglo-inspired folk music that would have yielded the group a modest career had they chosen to hang on. There’s no drums here and very little rhythm to speak of; instead, the trio employ mandolin, recorder, Jews harp, dulcimer, acoustic guitars and a banjo for an altogether timeless sound that should appeal to just about any fan of folk music. There’s an electric bass for some reason, but otherwise these songs would have been more at-home a hundred years or more prior to the seventies.

The tempo is mellow throughout with old-English themes and no sense of urgency whatsoever. The guitars and mandolin set the pace on most tracks, with Child’s recorder and the occasional Jew’s harp for variety.

Among the more interesting tracks are a rare three-part harmony rendition of the Anglo classic “Scarborough Fair”; a short string- picking ditty named “Dirge” that’s anything but; and an absolutely exquisite and vocal-heavy “The Two Sisters” that suffers only from a slightly muddled mix of Child’s voice midway through.

These tracks were originally recorded as demos, and languished in Saul’s attic for more than two decades after Child’s left the group and Saul and Corrick moved on to Stone Angel. The sequence of events after that is a bit unclear, but when the Stone Angel albums were reissued by Kissing Spell in the mid-nineties this album managed to make an appearance as well. It has since been released by Si-Wan as well. Unfortunately the band’s later work was never captured on tape, so there’s little hope of any additional material from this little gem of a folk aberration from the early seventies. If you are a folk music fan of any sort, this one is worth seeking out. Four stars and well recommended. 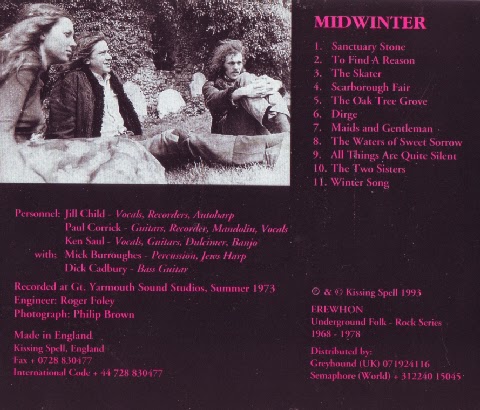 For lossy go here below:
http://amust4deafears.blogspot.com/

The link does not work.

Could you please re-upload?

Re-upped for your pleasure -;)

Thank you very much!!
GJ