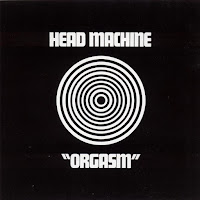 This album should be known better - "Head Machine" was one-album side project of "The Gods" (GenesisTo Samuel a Son),
initially designed to become their 3rd album, but which was recorded and released in 1969/70 under the moniker "Head Machine".
The album was produced by David Paramor (producer of "The Gods").
Both Hensley and Kerslake are on the album together with the bandmates (John Glasscock - bass, Brian Glasscock - drums, David Paramor - vocals),
but under pseudonymes.
Paramor is also credited as composer, although the songs have magical touch of Hensley.
The album was released before Hensley joined "Toe Fat". It is as heavy as they come, and might be considered as a prototype of the hardest side of future "Uriah Heep".
It is a good album, you can feel "Proud Words" coming.(Proud Words on a Dusty Shelf By Ken Hensley )
review by Golovanov Alexey

___________________________________
Editorial Reviews
History: This album is now a rare collectors' item, not least because it appears to have been recorded by The Gods under pseudonym. Musically it veers towards heavy rock with most tracks being pretty heavy with driving guitar work. The title cut and Climax are the pick of the bunch, whilst Make The Feeling Last and The Girl Who Loved, The Girl Who Loved are softer and subtler numbers. Lyrically (if it isn't obvious from the titles) the album basically deals with sex... Overall, a good example of the heavier rock genre which was quite prevalent in the late sixties / early seventies. Two tracks, I Can't Believe and You Tried to Take it All were later re-recorded for Toe Fat's debut album.