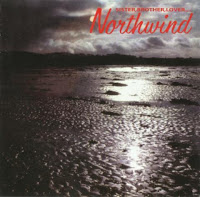 The 1971 “Sister, Brother, Lover” is a highly rated rural progressive-rock.
Since its first reissue back in 1994 it has been one of the favourites of collectors
of the label. Now re-mastered, it includes 2 rare bonus tracks.
The band's sound has been likened to that of the twin lead guitar style of
early Wishbone Ash with refined vocals. The songs are spiced with tasteful
organ/piano and additional percussion throughout.

The music is based on calm electroacoustic changes and stripped-down organ and some parts have some sort of early Yes-like chord progressions.They became ''Shug Barr and the Allstars'' for a short time after guitarist/singer Brian Young left the band.Lead singer Kim Beacon later joined String Driven Thing.

Northwind’s debut album “Sister, Brother, Lover…” was released in 1971 on Regal Zonophone in the UK and France, selling more than 10,000 copies. The band went on tour supporting the likes of Fleetwood Mac, Free, Deep Purple, Yes and Hawkwind. However, without much support from the management and the label, they soon disbanded. Thereafter Brian Young built a studio in his basement for his musician friends and eventually became a renowned mastering engineer, while other members have also remained active in music throughout the 70’s to the present day. “Sister, Brother, Lover…” fuses the elements of various genres which made up the rock scene at that time.

There's more on Northwind at http://www.rockingscots.co.uk/northwind.htm

Hi
Very grateful 'cause this music is simply marvelous !

Thank you so much...