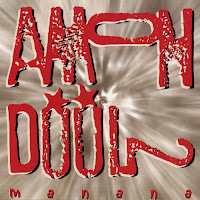 tagomago Mar 20 2002  4.00 stars
Mostly recorded at the Golders Green Hippodrone, London in 1973 Manana is an excellent companion to their 1973 Live In London album. Unlike Live In London, Manana concentrates largely on their post 1972 material with the exception of two tracks ("Kanaan","Dem Guten, Schonen, Wahren") from their 1969 debut Phallus Dei. Most of the performances here are tight and energetic, although not as well played as the performances on Live In London. This recording also features many of the same tracks performed live in the studio for the John Peel Show in 1973 as bonus along with two rather poor remixes of previously available material which Amon Duul II seems to be dumping on all their disks as bonus tracks.
-------------------------------------


Recorded live in concert at the Hippodrome, Golders Green, London, UK on May 10, 1973.