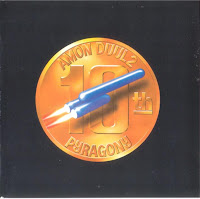 Although ADII evolved quite a bit throughout their lifespan, I would not say that they ever progressed. They simply changed from psychadelic krautrock to accessible pop/rock with experimental and psychadelic tendencies...and the evolution is evident from album to album. While songs may differ largely in overall excellence, every track this band ever recorded is easily enjoyable, that is to say they never made a bad song or album. If Pyragony X were my introduction to ADII, I may have been more hesitant to immediately consume all they have to offer, but such was not the case.

As far as variety goes, Pyragony X holds its own. No two tracks mirror each other in the least, unlike earlier efforts that hold a similar sound throughout. The opening track-1)Flower Of The Orient-is easily the best on the album and is a 5 star song in my opinion. A luscious and trippy experience with an eastern feel. 2)Merlin is cheesy and fun, sounding like a hybrid of earlier ADII and 70's blues/rock, complete with overindulgent guitar solo. The instrumental 3)Crystal Hexagram pulls me into a slight trance with it's spacey goodness, another highlight of the album. 4)Lost In Space starts out ok, but quickly becomes simple and boring, and just as quickly pulls out of the lull for an excellent fading finish. 5) Sally The Seducer has some good interludes between verses, but thats about it. 6)Telly Vision is a quirky song with goofy lyrics, and always puts me in a good mood. Nothing exceptional, just one of those perfect Sunday afternoon songs. 7)The Only Thing starts with promise, but fails to deliver, seemingly repeating itself for close to 8 minutes. Not a bad song, not as good as it could have been either. Thankfully the album closes on a good note:8)Cappuccino. I will say this song, much like the one before it, does not live up to it's potential, but it is an extremely pleasant little number. The chorus has a delightful hook to it that could easily have been exercised into something more powerful and emotional. Regardless, Cappuccino is a short and sweet outro.

All in all, Pyragony X is an album of good songs, most of which could have been better. What the album lacks as a whole is emotion. However, a lethargic Amon Duul II song is usually better and more interesting than that of countless other groups. I love this band, and stand by everything they've released...