Steve Hackett - Voyage of the Acolyte 1975


Steve HACKETT needs no introduction. He is definitely one of the major guitarists of this century. Ex-GENESIS, he is now a major force in the domain of music composed for guitar, rock as well as classical. Steve is a complex musician, drawing influence from a wide variety of styles and melding them into super compositions. His music has evolved over the years, and while some of it was not up to the standards that he set with other albums. They are still excellent. 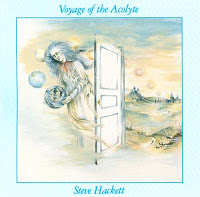 HACKETT joined GENESIS as guitarist in early 1971 and featured across ten albums of their history. He replaced Anthony PHILLIPS, and stayed with the band during their successful mid-70s progressive rock period. I remember once reading that, if GENESIS lost their "brains" when Peter GABRIEL left, then they surely lost their "heart" when Steve left. In a way, it is easy to see how HACKETT was "crowded out" of Genesis in 1977. From "Nursery Crime" in 1971 to the double-live "Seconds Out" in 1977, he created in his solo albums his own style, dominated by his guitars, sometimes very classical or at times furious. His tracks go from a symphonic Progressive style to a more energetic rock.

From the first album "Voyage Of The Acolyte" while he was still with GENESIS to his most recent ones, all are MUSTS. For the most part, all of the compositions on HACKETT's first five solo albums are well-thought-out and impeccably well crafted. I would highly recommend "Voyage of the Acolyte" (missing GENESIS album), "Please Don't Touch" (powerful), his TRADEMARK "Spectral Mornings" (pure magic), "Defector" (another amazing album by Steve), and "Cured" (pop-oriented). This, along with "Time Lapse", "The Unauthorised Biography", "Guitar Noir", "Darktown" and "To Watch The Storms", are the best for people curious about the HACKETT "feel". However I believe these are his bests - it could rightly be called "THE HISTORY OF MUSIC ACCORDING TO STEVE HACKETT." Get them ALL...and HAPPY LISTENING!!!


Steve Hackett's debut album, and what an album! Frequently tagged as the "lost" Genesis album, "Voyage of the Acolyte" is just wonderful down to the last drop. "Ace of Wands" opens things up beautifully, with the main riff of said song being present on different tracks throughout the album, which I am a sucker of. The rest of the album strives for excellence and certainly achieves it. Sally Oldfield's vocals on "Shadow of the Hierophant" are amazing and Steve's singing on "The Hermit" is pleasant, but his guitar work takes the show without a doubt. Definitely get this album if you enjoy Genesis. Disappointment is not an option here. Pure pleasure you'll get from this album.

The link is dead! Reupload please!

Thank you very much! I saw Steve Hackett live in Moscow in 2013. He is amazing! I certainly have had his first solo album (both LP and CD) for years, but without bonus tracks. Thanks again!