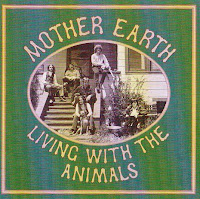 review by Greg prato:
The late-'60s/early-'70s blues-rock outfit Mother Earth was led by singer Tracy Nelson and issued several somewhat underappreciated releases during their time span. Nelson was originally from Madison, WI, and it was while attending the University of Wisconsin that the singer was discovered by producer Sam Charters and was eventually signed to a recording contract with the Prestige label. 1965 saw the release of Nelson's solo debut, the folk-based Deep Are the Roots, and when it didn't exactly burn up the charts, Nelson decided to relocate to San Francisco, with the hopes of forming a more conventional rock outfit. Shortly after arriving on the West Coast, Mother Earth was formed, which led to performances at the famed Fillmore West, opening for the likes of Janis Joplin, Jimi Hendrix, and Eric Burdon. After an appearance on the soundtrack to the 1968 motion picture Revolution (which also featured the Quicksilver Messenger Service and the Steve Miller Band), Mother Earth signed with Mercury Records and issued a steady stream of releases until the early '70s.

Though Mother Earth is often remembered as a vehicle for Tracy Nelson, Living With the Animals is a true group effort, combining memorable vocal performances with tight R&B-derived playing with excellent guitar work from Michael Bloomfield. Side one is a showcase for Nelson's blues belting and piano, particularly on "Down So Low" and "Mother Earth." Not to be overlooked is the blues shuffle "I Did My Part" and R.P. St. John's sardonic "Living With the Animals" and "Marvel Set," which features him on lead vocals. Side two doesn't hold up quite as well, though there are stellar moments here as well, including "Cry On" and "Goodnight Nelda Grebe," with fine horn section work and excellent Nelson vocals. Written and fronted by St. John, "The Kingdom of Heaven Is Within You" is a brilliant closer; it's nocturnal, moody, and spacy and showcases beautiful muted trumpets and reeds with a gorgeous flute solo by Link Davis Jr. The album was reissued on CD by Wounded Bird in 2004.

I have worn out 2 LP's and a cassette rip of this. It's been at least 10 years since I last heard it. I will really enjoy listening! Many thanks!

Please can you re-up. Thank You.