Six Archbishops of Canterbury are buried in Croydon, England, and if you’re a connoisseur of orange marmalade, the variety that comes in those handmade earthenware crocks comes from Croydon, too. It’s also a “swinging place for big shows,” because Croydon was the scene of a concert that was to become Delaney & Bonnie & Friends’ first album for Atco, On Tour With Eric Clapton.
The Croydon audience, which more than likely went to see their local-boy-made-good Eric Clapton, rather than Delaney & Bonnie, ended in giving D & B a most enthusiastic reception. Rightly so, for even though they occasionally laid things on a bit thick, Delaney & Bonnie & Friends with Eric Clapton put on a show that was a beautiful hybrid of southern funk and British rock. 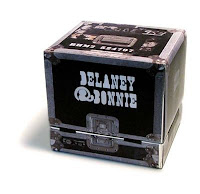 The Friends were fantastic at Croydon, especially Carl Radle on bass and Jim Gordon on drums, probably the tightest rhythm section going these days. The horns don’t get it on quite so well, and sometimes get carried away with second-hand Beatles licks more than they should, “Only You Know And I Know,” is really overdone by the horns, and they overwhelm everyone except themselves.
Eric Clapton is a whiz on guitar, though he keeps to himself a lot, for fear of taking the spotlight from Delaney or Bonnie. On “Things Get Better,” for example, Clapton takes an extended solo exploring the possibilities of one note. Eric seems to have found a new humility during his association with Delaney Bramlett, and it is reflected in his playing. Diehard Clapton fans might be disappointed, but it’s nice to see someone of obvious talents decide to quit being a Pop Star and start being a good musician.

Delaney is developing into an amazing singer, as shown on his tribute to Robert Johnson, “Poor Elijah,” and his work with Bonnie is getting into the realm of the finest boy-girl soul duets that anyone’s done. Bonnie sings one solo, “That’s What My Man Is For,” and she’s not bad, but she’s been in better voice on the Bramletts’ previous albums for Elektra and Stax. Ah, well, perhaps the girl can’t help it.

If there was ever any doubt as to the future of Delaney & Bonnie & Friends after Clapton’s departure, it’s all been forgotten. Their first, post-Clapton single, “Free the People,” is a sheer delight. Opening with Salvation Army horns playing “Rock of Ages,” Bonnie sings in her best Sunday schoolgirl voice, “Free the people from the fire/Pull the boat out of the raging sea./Tell the devil he’s a LIEyuh,/Come and save the likes of me.” Delaney picks it up with his verse, punctuated by some hilarious horn riffs, and then they take off — just like “Hey, Jude” with a tuba. Some Top 40 stations have picked up on it, and with luck, it’ll be a hit.
And next time you spread orange marmalade on your English muffins (or whatever you spread it on), think of Croydon. A lot of people there love Delaney & Bonnie.
- Chas. Burton, Rolling Stone, 7/9/70.

Bonus Reviews!
Delaney & Bonnie are what would happen to rock and roll if it were capable of growing up — maybe they’re what would happen to this country if it were capable of growing up. Whites so down-home in their soul inflections sound inbred, they sing of love like teens of yore, but even though their love is quite physical it’s been weathered spiritually and morally. No wonder Eric Clapton found their youthful fun and mature equanimity an antidote to the formless pretensions of Cream and Blind Faith. He certainly contributes — whenever the voices don’t quite carry the one-take live performances, there he is with a terse, punchy solo that adds just the right note of strength and understanding. Nice that he’s got Dave Mason (and Delaney himself) to help out. And nice that they all pay their respects to Robert Johnson and Little Richard. A-
- Robert Christgau, Christgau’s Record Guide, 1981.
Recorded with Eric Clapton, On Tour features Delaney & Bonnie’s blend of country, rock, blues, and gospel. It includes “I’m Coming Home.” * * * *
- Kenneth M. Cassidy, The All-Music Guide to Rock, 1995.
Delaney & Bonnie & Friends on Tour with Eric Clapton is a joyous live romp tinged with soul-satisfying gospel. Clapton is loose and plays at his searing best, while Delaney’s forceful vocal delivery and Bonnie’s lead and harmony vocals sway between over-the-top dynamics and reflective balladry. * * * * 1/2
- Patrick McCarty, Musichound Rock: The Essential Album Guide, 1996.

(2010 Deluxe Edition Box Set) Delaney and Bonnie Bramlett were a husband-and-wife team whose soul-inflected rock earned them an admirer in Eric Clapton — the guitarist even credited Delaney for giving him the confidence to sing. Cut at London’s Royal Albert Hall while the Bramletts were touring with Clapton in 1969, this live album featured wicked performances of the kind of country and boogie that would define Southern rock. This four-disc reissue includes the entire concert plus songs from later nights. The 52 tracks catch the musicians — a who’s who of Clapton-related players, including George Harrison — at their peak. Bonnie’s wailing, powerhouse vocals steal the show on R&B burners like “That’s What My Man Is For,” and some of the best songs here are ones that didn’t fit onto the original vinyl album — including Clapton’s heartfelt “I Don’t Know Why.” * * * *
- Mark Kemp, Rolling Stone, 9/2/10.

In 1969, the Bramletts briefly led a roaring-R&B big band with Clapton, George Harrison and Dave Mason on guitars. The set lists at these four U.K. shows were consistent. So were the fireworks.
- David Fricke, Rolling Stone, 12/23/10.